The rumors continue to talk about the new and alleged 16-inch MacBook Pro, which Apple could launch by October, according to a new report on the supply chain of the Economic Daily News. The aforementioned report also states that Apple will release updated versions of the 13-inch MacBook Pro and MacBook Air Retina in October.

As for prices, the report states that this Mac will also have a new higher price, compared to other Apple notebooks, due to the high cost of manufacturing the new components, but above all for the absurd power released. According to reports, the supply chain industry expects the laptop to have an initial cost of around $ 3,000, or about € 3,000, positioning the product’s interest only for truly professional markets.

As for the rumors on the MacBook Air instead, and also on the 13-inch Pro, I can tell you that the RAM will be increased, and we will move on to a new scissor system for the keyboard, which will really solve the problem of the previous butterfly.

Finally, I tell you that Apple has just received FCC approval for a new unpublished MacBook Pro, which has a model number that corresponds to A2159, also equivalent to one of the numbers relating to the models recently registered with the Eurasian Economic Commission.

In the FCC documentation, Apple specifies that the A2159 machine is exactly a Macbook Pro. Although the rumors confirm the arrival of a new 16-inch model, I remind you that in May Apple updated its line of MacBook Pro, introducing new processors and other RAM.

This, however, can make us understand that the model will be something “exclusive” or “innovative” because otherwise, it would not make sense what has been done recently. 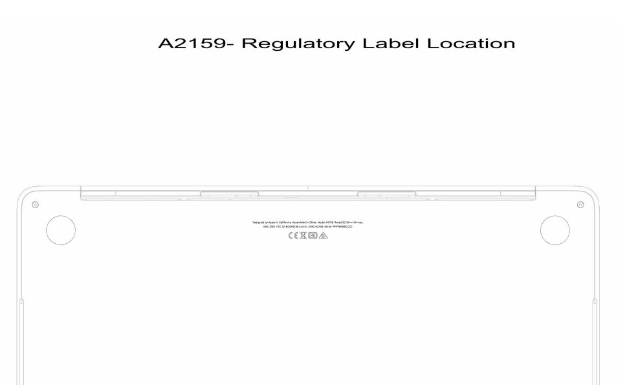 A2159 is a model that was not included in the May update, and it is not entirely clear what is 100%. As one Reddit site user points out, the back of the machine says it has 20.3 V – 3 A Max, which equates to 61W, suggesting perhaps an updated version of the 13-inch, although it could simply be a new OLED display on the alleged 16-inch model.